Australian winemakers have been making exemplary expressions of various styles of fortified and dessert wine for decades, which is highlighted in the fine selection of muscat liqueurs and topaque available at many premium local and international wine stores.

Perhaps the greatest and certainly the most popular expressions of Australian fortified wine, however, are those bottles of Australian tawny produced by many small and large wineries across the country.

For a quick guide on how these wines taste and match with food, consider our handy graphic below or read on to discover more.

To find out more on some of the other fortified and dessert wine products made in Australia, consider visiting this page.

Why is it Called Australian Tawny?

Until the 1960s, the Australian winemaking landscape was very much dominated by the production of Australian fortified wine products.

Preceding that date, more than 80% of wine production in the country was centred around fortified wines, making it one of the longest and most successful stories in Australian winemaking history.

Whilst bottles of Australian tawny are made in the same style as their counterparts from Portugal and, until the 1990s, were labelled the same too, many will note that they are now no longer called “Port”.

This is due to the Port Regulatory Council deciding that only those bottles of Port wine produced in Portugal were allowed to be bottled with that name, resulting in the producers of these styles of wine in Australia referring to their products as just “tawny” instead.

With this being explained, it is important to note that bottles of Australian tawny are made in a very similar fashion to those bottles of tawny Port found in Portugal, with many of the wines having spent years, sometimes decades, in oak barrels prior to being bottled and ready for release.

How do Australian Tawny Wines Taste?

Irrespective of the regulatory and naming issues, Australian tawnies are made in basically the same style as the Ports of that name produced in Portugal, meaning that they are often blends of different grapes from various vintages that have each been aged for some time in oak barrels prior to bottling.

Australian tawny differs slightly, however, in that it is often produced from shiraz, grenache, mataro, or touriga grapes, as opposed to the indigenous grape varietals used in Portugese Port.

Flavourwise, these wines are almost the same, with many featuring notes of dried fruits, exotic spices, nuts, caramel, and butterscotch, with slightly more complex flavour profiles developing as the wine is aged for longer in oak before release.

Overall, Australian tawnies are known for their medium to full bodied character and moderate to high levels of sweetness, with them often being best served slightly chilled so as to bring out the lively berry, spice, and dried fruit notes.

Where is Australian Tawny Produced?

As the grape varietals that are most commonly used in the production of Australian tawny wines thrive best in warmer climate regions, some of the best bottles on the market usually come from many of these hotter regions of the Australian winemaking landscape.

Prominent mentions include the Rutherglen region in Victoria and the Barossa Valley and McLaren Vale regions in South Australia.

That being said, there are no restrictions placed upon where tawny wines can be produced in Australia, making it possible to find bottles of tawny made by winemakers across the country. 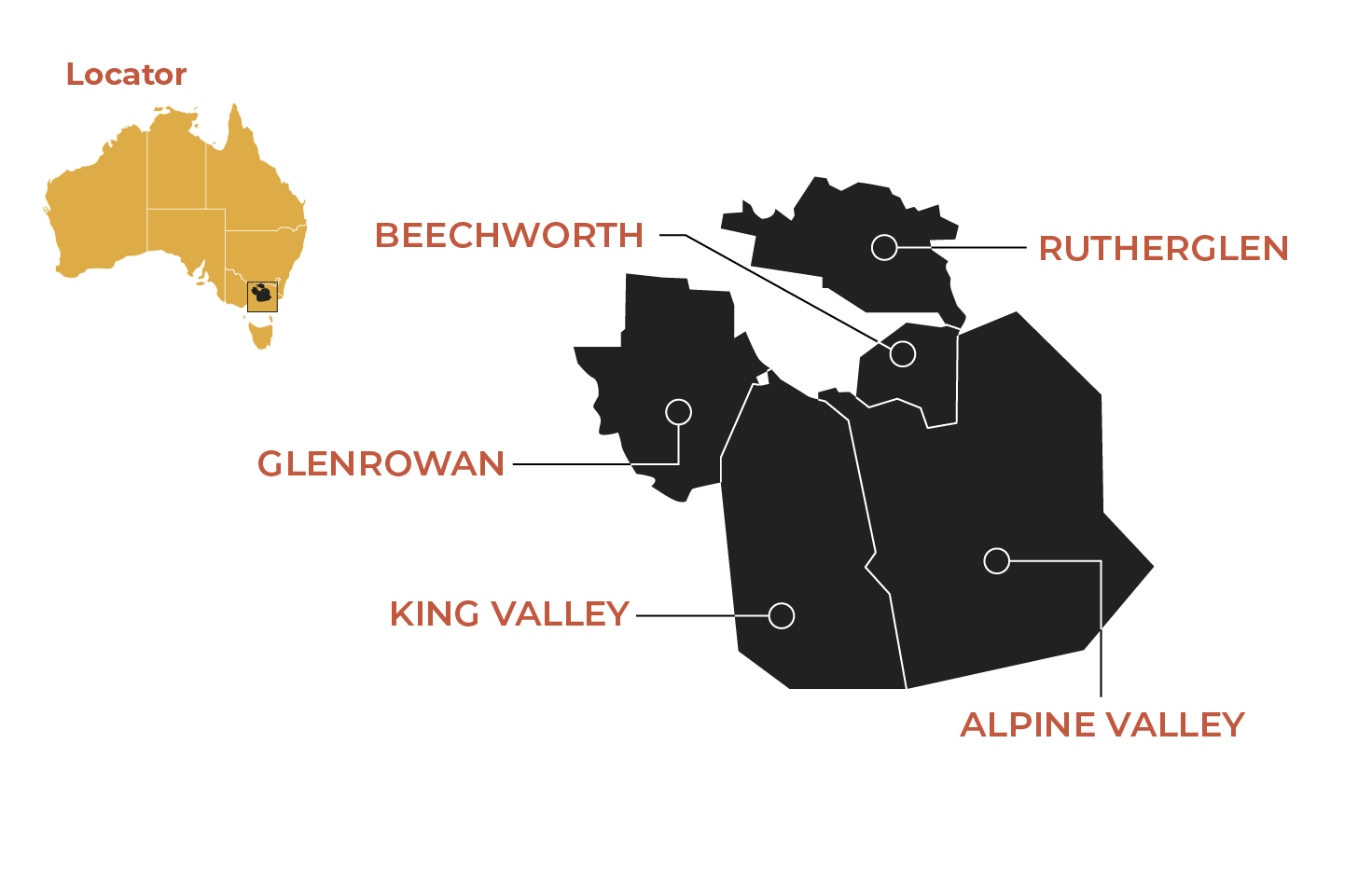 Just like those wines of that name found in Portugal, bottles of Australian tawny will always spend considerable amounts of time in oak prior to their release, giving them their red brick colouring and complex flavour profile.

This also means that the best way of separating bottles of Australian tawny wine is to look at how long the wine in the particular bottle in question has spent resting in oak before being bottled, with this usually being indicated clearly on the label.

Below is a list of some of the typical grades or classifications given to bottles of Australian tawny, which helps us to determine how they might taste and how they were made.

For a full legal explanation of these classifications and those that are applied to other Australian fortified and dessert wine products, see this document.

Bottles labelled as simply “Australian Tawny” represent the entry level to the classification system, with the average age of the grapes in the bottle usually falling below 5 years.

These wines are often described as being less complex and more fruity in their taste and often meant to be used for cooking as well as drinking.

Bottles with the name “Classic Tawny” will have an average age greater than 5 years, making them slightly more developed in their flavour profile and meant to be used for drinking rather than cooking.

They will often have a more oxidised character, with sweet spice notes and dried fruit coming through in greater abundance than is the case in regular Australian tawny.

Those bottles of Australian tawny labelled with the name “Grand Tawny” must have an average age of greater than 10 years, making them far older and far more complex than anything before this point.

These represent almost the pinnacle of Australian tawny wines, with strong oak and oxidised character shining through over that of the fruit.

As the name suggests, bottles of “Rare Tawny” are not often readily found, with the winemaker being required to blend vintages of wine with an average age of greater than 15 years before being able to use this coveted distinction.

These wines are incredibly rich and complex, with caramel, sweet spice, and dried fruit flavours overlapping on the palate.

Due to their sweet, rich, and often very complex flavour profiles, you’d be forgiven for thinking bottles of Australian tawny should only be enjoyed on their own.

That is simply not the case, however, with winemakers recommending a number of ideal food pairing choices when considering matching these wines with food. 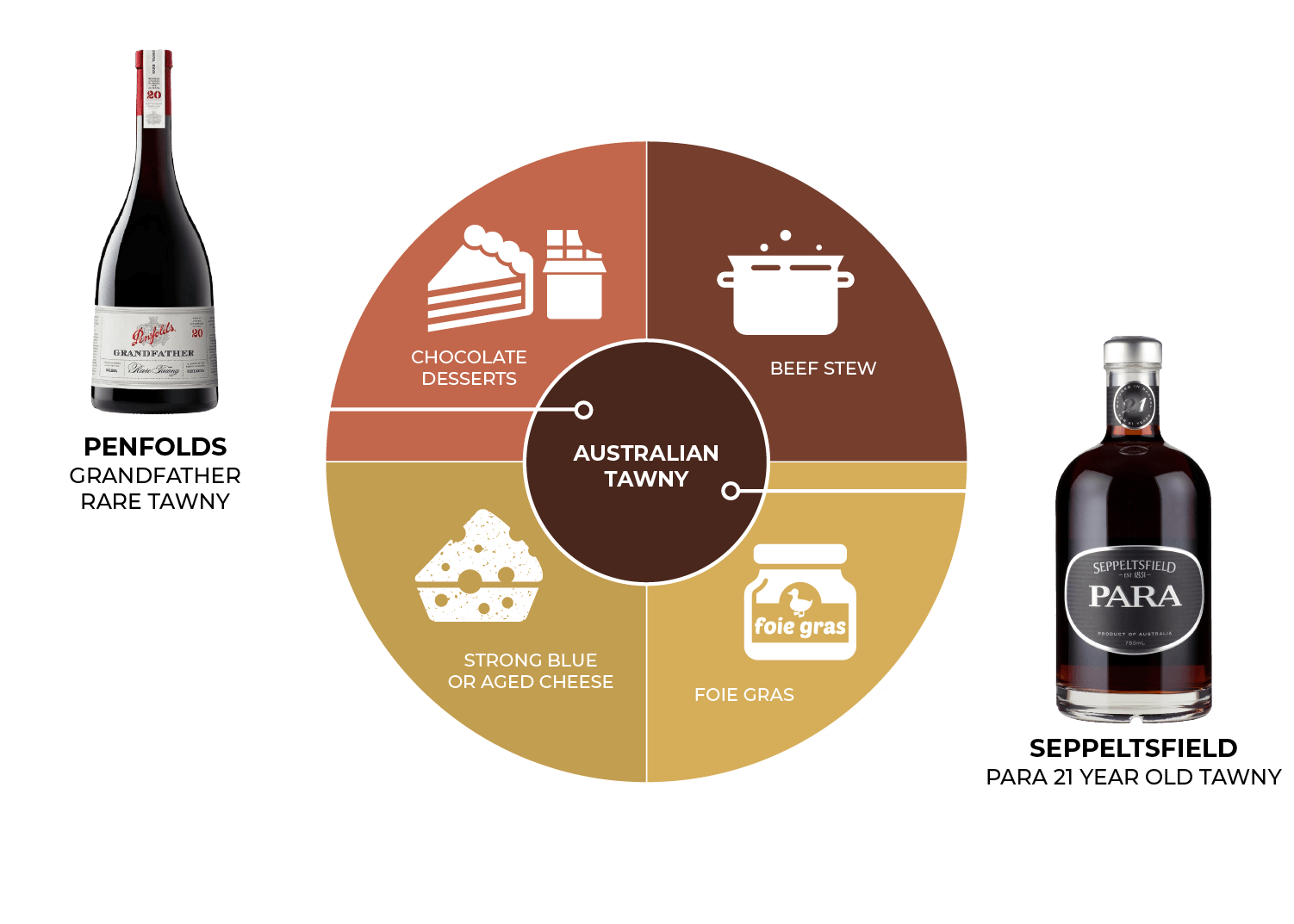 Second to this, it is often recommended to match a bottle of Australian tawny with most kinds of beef stew, as the heaviness of the drink can pair well against that of the dish.

Moving on to cheeses, Australian tawny wines are easily served with strong blue or aged cheeses, as the sweetness of the drink pairs wonderfully with the strong flavours of the cheese. 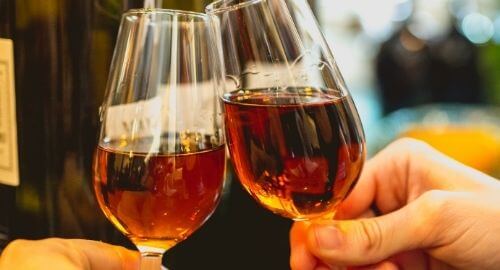 All of the Ways to Drink & Enjoy Sherry

Sherry is a complicated & often misunderstood drink. Here we explore all of the ways that it can be enjoyed & how you can pick the right bottle & type for you.

What Are Sweet Wines & How Do I Find Them? 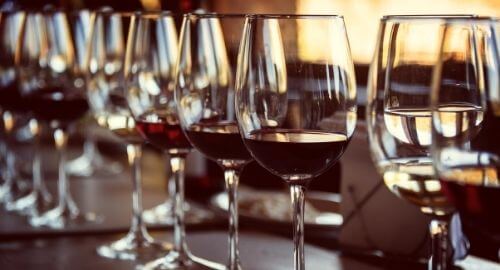