To be called a Polish vodka, the spirit can only be distilled from either potatoes or one of five grains, including wheat, rye, barley, corn, or triticale.

In addition to this, Polish vodka must also be made exclusively from ingredients grown in Poland and the distillation itself must occur in the country, with bottling, however, being able to occur elsewhere.

Beyond this, vodka produced in Poland follows the principles of those made elsewhere in that it must be without distinct taste, aroma, colour, or smell, except, of course, in the case of flavoured vodka products.

In Poland, those bottles of vodka produced from either rye or wheat are generally considered to be of a superior quality, although potatoes are often substituted instead of these grains to produce a denser textured vodka.

For more on this topic, read this interesting article, which offers up more on how Polish vodka is produced.

Due to the high quality and strong reputation of the vodkas produced there, Poland is a good place for those wishing to walk on the more premium side of vodka. 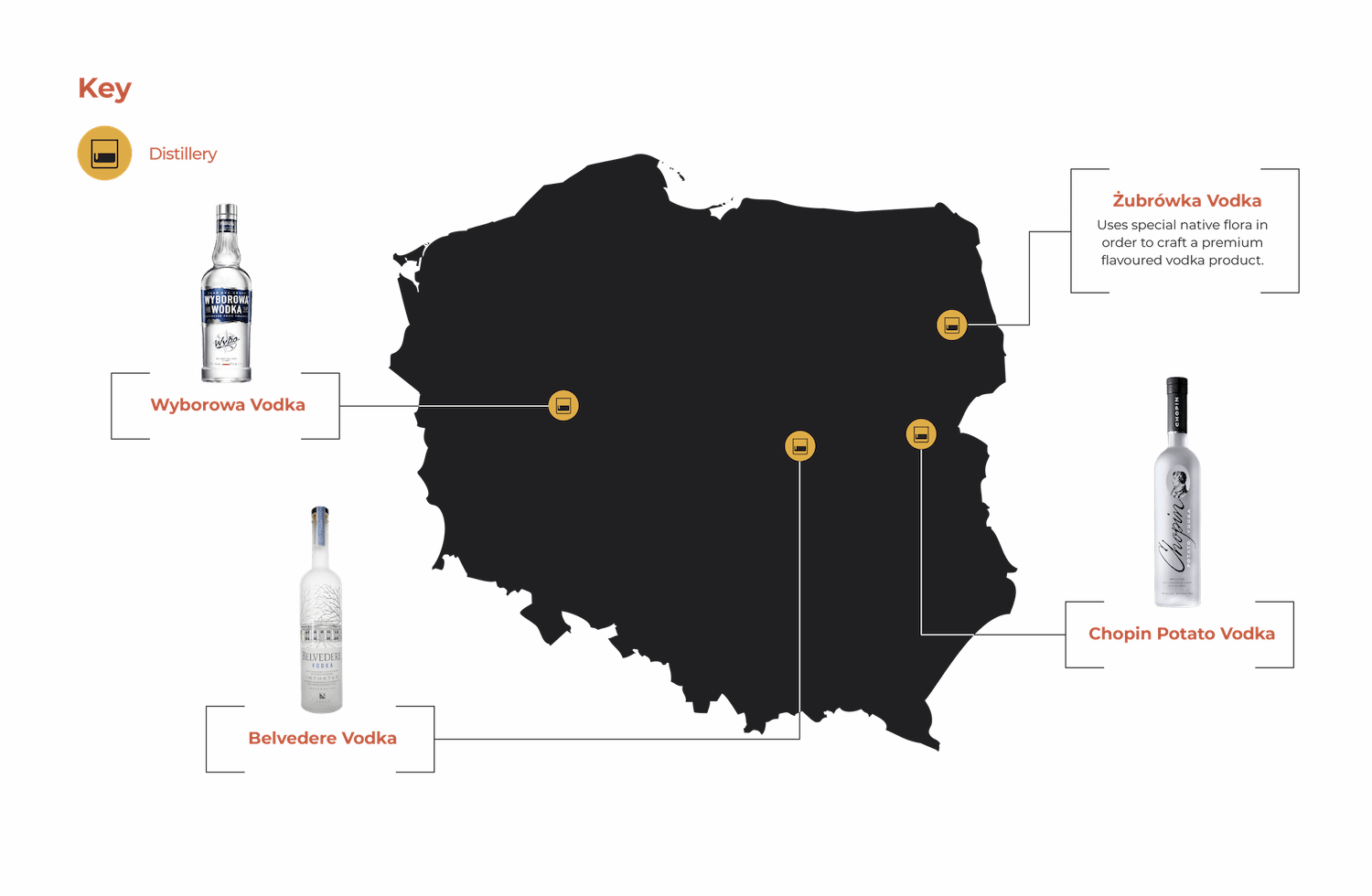 As mentioned, Poland is famous for being home to many of the most premium and sought after vodka brands in the world.

Some of these include Żubrówka Bison Grass Vodka, Belvedere Vodka, Chopin Vodka, and Wyborowa Vodka.

Żubrówka Bison Grass Vodka is distilled from rye and enters the market as a flavoured vodka due to the fact that it is flavoured with bison grass that grows in a native forest in Poland, with it tasting distinctly of apple pie when mixed with apple juice.

This article explores more on why this vodka is one of the most popular flavoured vodka products available to bartenders worldwide.

Belvedere Vodka, named after the Presidential Palace in Warsaw, is another vodka distilled from rye that sits at the premium end due, in part, to its quadruple distillation and superior quality.

Various bottles of Chopin Vodka exist, each being distilled from different grains, including wheat or rye, and potatoes, making the brand one of the best premium vodkas available with perhaps the greatest range of products.

Finally, Wyborowa Vodka is one of the most well known vodka brands to come out of Poland and, similar to Chopin Vodka, can be produced from a variety of organic materials, including rye, wheat, or potatoes.

As is common right throughout all of Eastern Europe, people from Poland tend to drink their vodka neat or chilled from the freezer rather than mixed within a cocktail or mixer.

The advantage of serving vodka chilled is that it increases the viscosity, or texture, of the spirit and softens the flavours and aromas present in the bottle.

This makes it more prevalent to freeze lower quality vodkas and reserve the more premium and higher quality products to be consumed at a warmer temperature.

Other than neat or over ice, it is possible to combine bottles of Polish vodka into many cocktails, such as the Vodka Martini or Vodka & Cranberry, or mixers, including lemonade, cola, or orange juice. 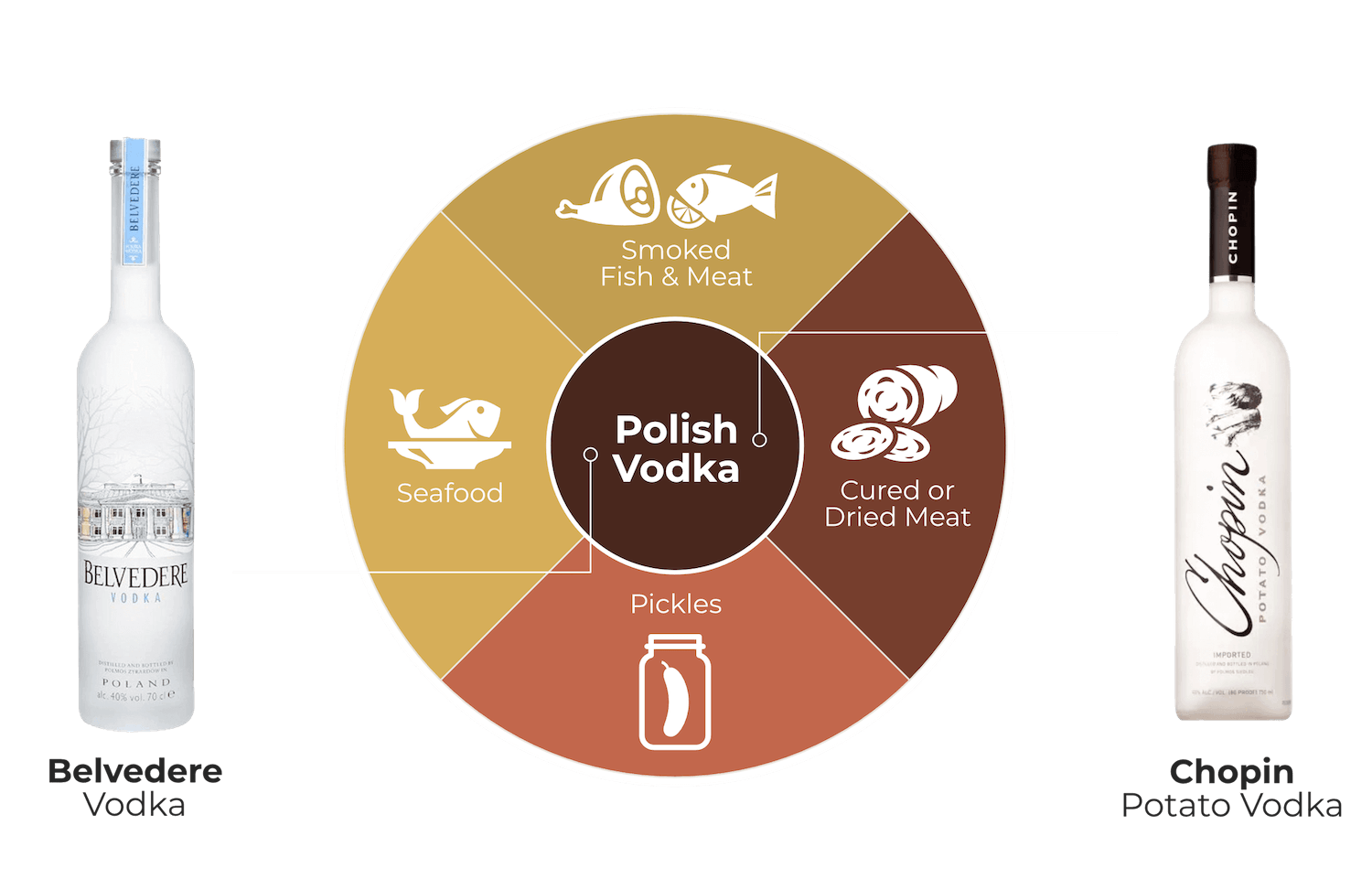 Food pairings with Polish vodka follow similar pairing methods practiced with vodkas made elsewhere in that they are best paired with smoked fish or meats, cured or dried meats, pickles, salted snacks, fresh salads with lots of zest or seafood dishes.

It is important to consider the vodka being chosen, however, as the texture and taste profile of a specific bottle can differ depending upon the distillate used to produce it, altering the optimal dishes to be used for pairings. 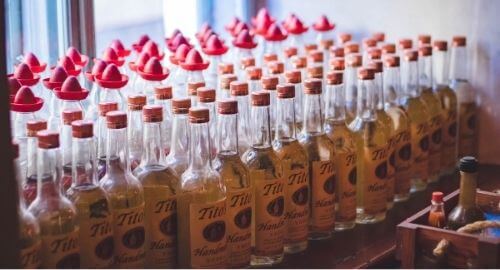 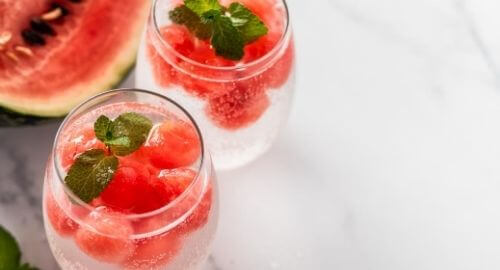