Armagnac, though often overlooked in favour of its more famous relative Cognac, is a type of distilled grape brandy hailing from the Gascony region in South West France.

Distillers of the spirit, similar to those who produce Cognac or Scotch whisky, are bound to follow a number of strict rules before being able to call their final product Armagnac.

First, producers must follow a single distillation process within a continuous column still called an alembic armagnaçaise, a process that must conclude by the 31st of March each year.

Another important rule is that the base wines used during this process can only be sourced from a range of ten different white wine grapes grown exclusively in Gascony, with the wines being characteristically high in acidity and relatively low in alcohol (around 7-12%).

Post distillation, the resulting clear spirit is called eau de vie, which is then aged in new French oak barrels for anywhere between six months to two years, before being transferred to older oak barrels for further ageing and development of additional flavour and character.

Each individual aged eau de vie represents the product or vintage of one harvest, with a number of different vintages usually being blended together in an intricate and careful process that ensures the right balance of flavours in the final bottle of Armagnac.

Similar to Cognac producers, Armagnac distillers are also permitted to include a small number of additives prior to bottling, including sugar, to add sweetness, water, to reduce the alcohol content, boisé, a form of boiled wood flavouring that is used to enhance the characteristics of ageing, and finally caramel, for colouring and consistency.

Once these steps have been followed, a distiller either then blends and bottles a number of different aged eau de vie, or a selection from one vintage, together, producing the final Armagnac spirit.

There are, however, a number of further classifications that are applied to the resulting spirit, denoting varying degrees of quality and taste.

How to Classify Armagnac

Once the basic steps above have been followed, bottles of Armagnac are then given further classifications based upon other factors of production, including time spent ageing or number of blends from different years, which allude to the quality and taste of the resulting spirit, outlined below.

As Armagnacs are often a blend of different aged eau de vies, the age statements followed above apply to the youngest vintage used in the bottle, with a single year depicted on the bottle meaning all of the blends used came from that year.

When looking for those Armagnacs of greater depth of character and taste, it is generally best practice to choose bottles that have been aged for longer periods, as the extra time spent in oak results in more flavour development.

When considering the brand of Armagnac being purchased, it is important to note that it is not always the case that the grapes used in the final blends are grown by the brand featured on the bottle.

In the world of Armagnac there are producers, who grow all of the grapes found in the bottle being sold, and there are also negoçiants, who may or may not own some of the vineyards or wines used to make their blends and who will instead purchase wine or grapes from other growers or producers.

The growers and producers themselves are separated into various sub-regions within the broader Armagnac region, outlined below. 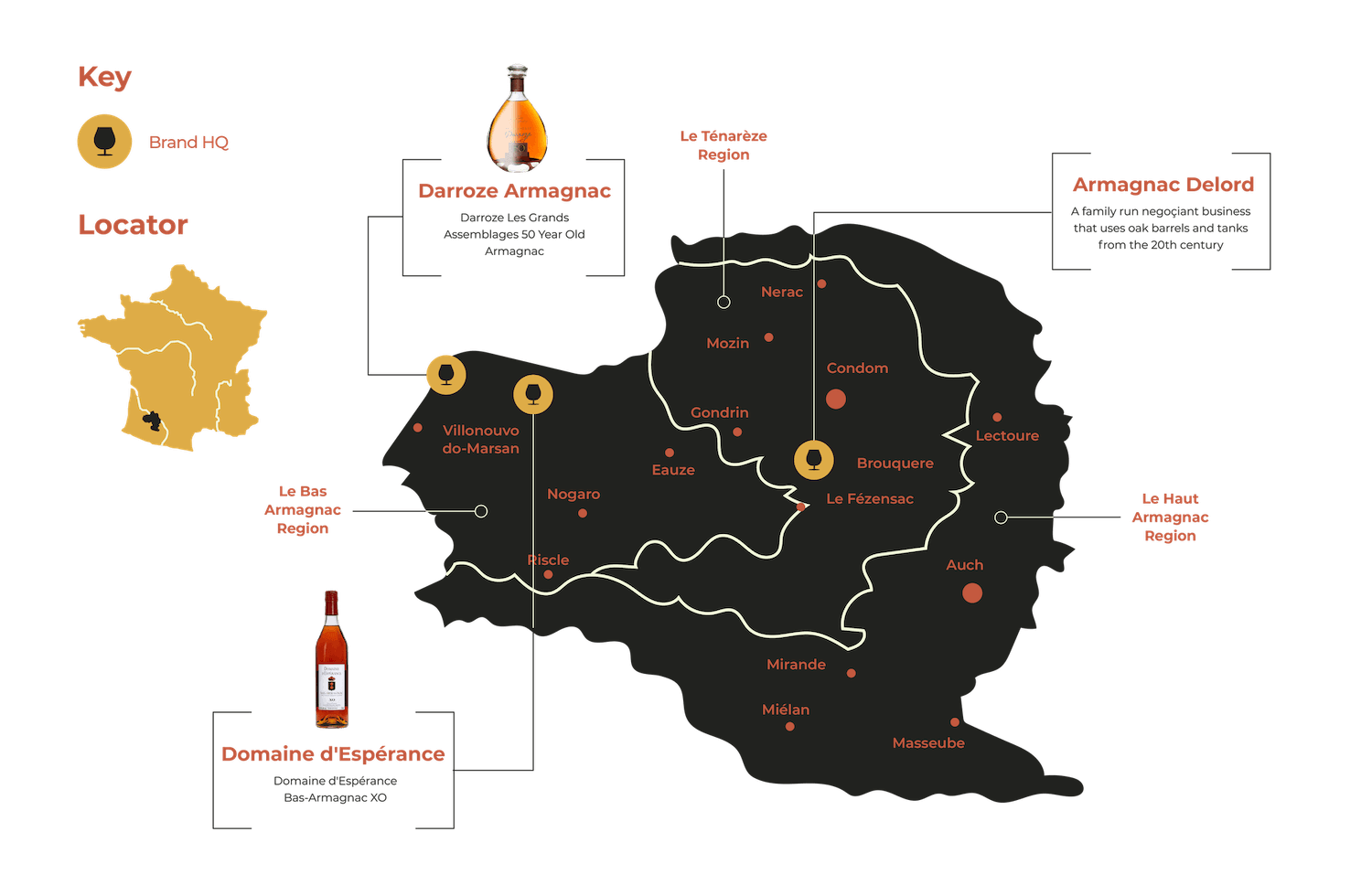 This being explained, some of the biggest brands in the industry are Darroze Armagnac, who are negoçiants that produce some of the most well received bottles on the market, Armagnac Delord, a family run negoçiant business that also grows many of the grapes used in their final blends, Domaine d'Espérance, who are famed producers of some of the best Armagnac in the region, and finally, Jollité, who produce one of the best entry level Armagnacs available.

How to Drink Armagnac

Though similar to Cognac, the flavours and aromas of Armagnac are generally considered to be more robust and intense as a result of its single distillation, varied ageing process, and wider number of grapes permitted for use.

For an additional explanation on how the sub-region the bottle is made in typically affects the taste of the resulting Armagnac, head to this site.

Whilst different flavours are developed as the spirit is aged longer, the prominent examples found across most bottles of Armagnac will include prunes, oranges, dried and fresh apricots, sweet spices, such as vanilla and cinnamon, and notes of caramel and coffee.

It is important to note that ageing has a remarkable effect on the attributes of the Armagnac, affecting all of its facets, including colour, aroma, and taste.

When it comes to enjoying Armagnac, the experts agree that most should be consumed as a digestif at the conclusion of a meal, with it being allowed to air for 15-30 minutes prior to being consumed.

Although consuming the spirit neat is often recommended, Armagnac can be enjoyed in a number of exquisite cocktails for those who prefer to drink their spirits in this way.

Popular examples include the Armagnac Sour or the Armagnac Sidecar, which can both be enjoyed by supplementing Armagnac for Cognac, if preferred. For additional cocktail suggestions, head to this site, which details some of the best Cognac and Armagnac cocktails that can be found. 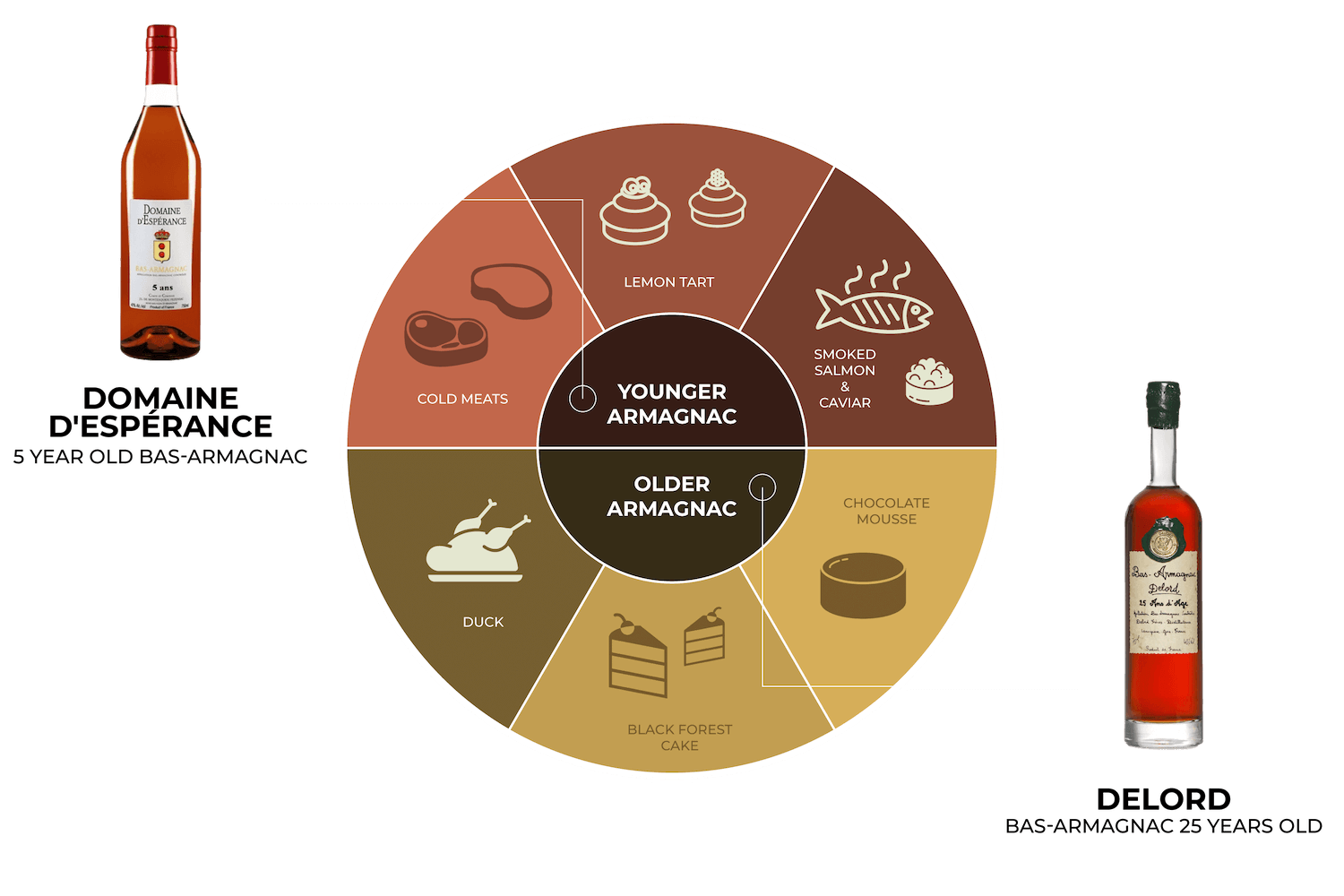 Though somewhat similar in taste to Cognac, the more robust flavours contained in many bottles of Armagnac results in spirits that can easily be paired with a range of interesting foods and dishes.

When serving a bottle of younger Armagnac, it is common to match them with smoked salmon, caviar, foie gras, cold meats, and lemon tart, as the tartier flavours of the spirit match well with these foods.

For older Armagnacs, the more developed and mellowed flavours can be paired with duck based dishes, particularly those with orange sauce, or alongside a range of desserts, including black forest cake or chocolate mousse. 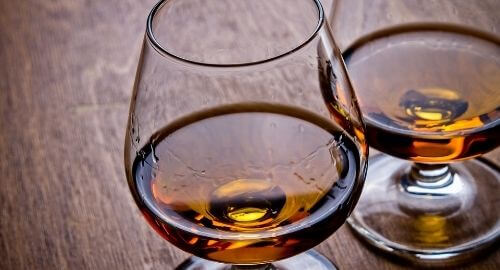 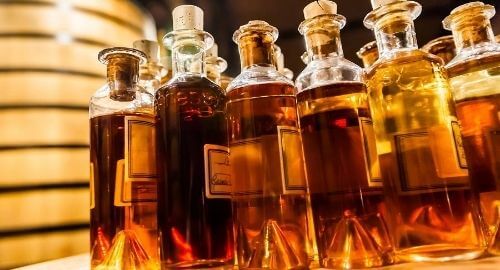